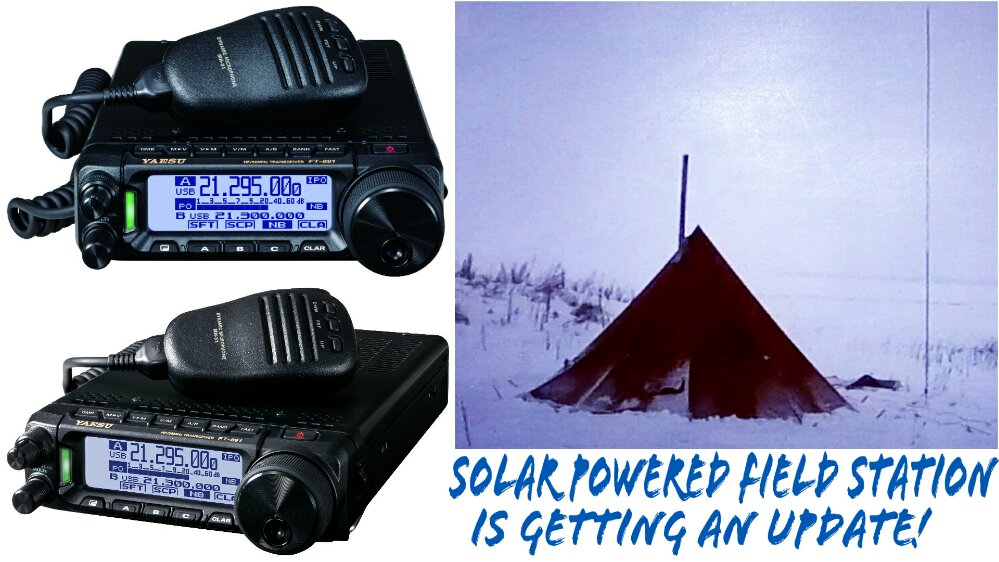 The Yaesu FT-891 for the Solar Powered Field Station was totally funded through the GoFundMe campaign. A huge thanks to everyone who contributed to the project, or shared the project with their individual communities.
I start working on a project list for integrating the 891 into the solar powered Field Station. I’ll get that out as soon as possible.
I have to say, we’re going to have some pretty incredible Adventures the coming spring and summer.
73
Julian oh8stn

Hello Operators
The GoFundMe campaign for the Solar-Powered Field Station has brought us closer to this dream than I would have imagined. As you may know, the campaign was started to fund a more capable radio for the Solar-Powered Field Station. That radio was initially a Yaesu FT-857D. After some research I’ve realized the Yaesu FT-891 has the same current draw as the 857, a larger screen, slightly smaller form factor, lower cost, and the most incredible filtering available on a modern portable rig of this size. The cost of those benefits is the loss of VHF and UHF coverage since the 891 is a HF-6 m radio. That’s not a problem for me, since I still have the Kenwood TM-D700.

Since I switched the focus from 857 to 891, I’ve also reduced the campaign goal to match the reduced cost of the new rig, putting the campaign goal even closer than we already were. It also leaves us at the final stretch for the finish line, (and an end to these GoFundMe posts).

The Solar-Powered Field Station project has already covered many aspects of putting together a practical self contained man-portable station. Here are some of the topics covered already.

The most popular aspect of the field station has been DIY portable power. It seems portable power is a common problem to all field radio operators. This project has published tutorials enabling many ham radio operators to build and deploy lightweight, RF quiet, and cost effective portable LiFePO4 packs, in the DIY spirit of Amateur radio. The project has also outlined the merits of thin-film flexible solar panels, to the field radio operator. There are still many relevant topics and DIY builds planned for the project, including projects enabling man-portable field deployment and portable power for the Ysesu FT-891.

Contributing to the project
There are three ways to contribute to the project.
– Contribute through the GoFundMe campaign
– Become a Patreon supporter or one-time PayPal supporter
– Share your favourite videos or blog posts from my channel/blog

If you haven’t seen the Solar-Powered Field Station videos published yet, here is the playlist for the series.

Many thanks to everyone who contributed, in whatever way they could. it’s always pretty awful trying to raise money, and I definitely won’t make a habit of it. If all goes well, this rig and the field station, will take us forward another three to four years with the channel. Finally, when we reach the campaign goal, I’ll make an outline of everything we’re going to accomplish during 2018 with the solar powered Field Station.