The entire idea of a RaDAR Challenge (from my perspective), is getting outside with your gear, trying to get your comms on in the most difficult operating environment for an amateur radio operator. That’s QRP (or QRO) Portable, far removed from the comforts of your ham shack. Everything that can fail, will fail in a RaDAR Challenge. So we spend most of the time preparing for a RaDAR Challenge, just to be successful, when it comes around. Incidentally, the same skills required for field communications preparedness, are right here in the RaDAR Challenge.

There’s a video which augments this blog post. You can scroll down to the bottom where it’s embedded in this post or click here to watch it now.
Lets get started.

WX Conditions were not bad at all. The temps hovered between -2c and 0 for the entire day. When there was plus temps, I had freezing rain. When the temperature dipped, I had snow. Snow would have been my preference since the wet gloves contributed to minor frostbite on my finger tips upon arrival back home. From my perspective, there is little difference between 0C and -20C. The thing which kills you is the humidity. Still it could have been worse.

Some operators will ask why I didn’t start a fire. Great question, by the time I get a fire going, it could easily be time to tear everything down and head off again. RaDAR Challenge ops require you to move after 5 contacts. Had my PSK and JT65 ops worked as planned, I would not have been there any more than 20 minutes. So in this case, I needed to rely on my clothing to keep myself dry and warm while I did what I needed to do. You see, the RaDAR Challenge doesn’t just test your radio gear, it also tests you, your clothing, your skills to troubleshoot, your planning and coordination skills, … It really is a beast if you want it to be. It is also disaster comms 101.

Preparing for deployment. I started the day by fitting all my comms gear inside a pelican case. This “systems integration” style of gear deployment,  has advantages in cold WX.  In my case,  it would reduce the amount of gear fiddling to do before getting on the Air. It would also help reduce hand exposure to cold metal components during setup. The “go-box” approach was well worth the time and effort it took to set it up.

So the go box included: This could not have  been easier. I used my small skipulk and custom harness to get myself and my gear to my first operating location. I carried my tablet as an APRS client and GPS in the sling pack you see at the front of the skipulk. Tripod and chair were strapped on the sides, table underneath, with pelican case on top. I did not have time to install the gear cover and tie down straps, like my larger skipulk. The result was snow and ice getting into the skipulk and making it heavier, and me grumpy Yaesu FT-817ND
As much as I complain about this radio not being updated in how many years, it remains a workhorse. Honestly, the only thing I can say is “It didn’t let me down”. Other than my tablet, the 817 took much of the beating from the freezing rain. I mean it had to. We were both in the thick of it, and it had to do its part. I often wonder when guys ask me about saving a few bucks, by buying the latest xenthis, or fengthat radio. After you send it back a few times, because the buttons don’t work, the display is failing, or the rx performance is critically awful, was it really a better value than an 817!?

Speaker/Microphone Headset requured. One thing to add to the 817 is a headset with over ear speakers and boom microphone.  As I did years nearly two decades ago, I searched  the Heil offerings,  but didn’t find any lightweight  over-ear headsets in their current product line. That’s a bummer. If anyone has any suggestions for a good over ear Boom microphone headset which plugs straight into the 817, please let me know. 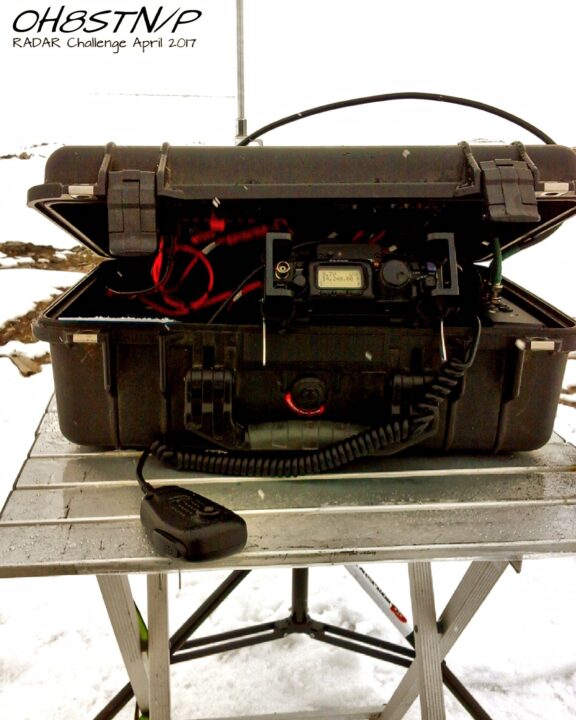 Antenna system I had originally planned to take two antenna systems out with me. At the last moment I decided to simply pick one, and go with it. I picked these Super Antenna MP1DXMax, because of it’s higher power handling and smaller breakdown size. QRO Digital modes can be incredibly hard on antenna systems,  so I decided not to risk damaging any other antenna since the MP1 has a 500w rating. The plan was to use the amplifier as a test to run JT65 to ZS.  (don’t give me any poo about the amp guys. I am QRP-Core!) I only took the components I needed for the days excursing. In hindsight I should have taken an SWR meter with me to simplify finding the best coil position on the MP1DXMAX, during rapid band changes. The frequency guide is fine, but the meter would be faster and remove the human factor. I also don’t want to  do any extra fiddling in the cold. which we know is a bad thing.

In its entirety, the MP1 worked out well. It didn’t complain about the amplifier, and stations I called (QRP)  heard me on the first try. That being said, conditions were horrific, but that didn’t stop me from working Italy on JT65 and SSB.

The MP1DXMAX bag.
I switched out bags for the same reasons as wanting to use the SWR meter. The MP1DXMAX bag is awesome, but it is filled with pockets and little hiding places that don’t work with mittens and cold wx. The round pack fits all the same kit, but lets me access everything with one zipper. Again, without taking off my gloves.

In one of the the pictures above, you can see I have packed the MP1DXMAX into a round pack. That’s actually the pack (and most useful part) from the short element  EZ “Military” whip. You can find that bag from amazon if you need a single zipper to open bag/pouch. As you can see, I can fit everything in that pouch (even the 80m & 60m coils) plus a small tripod and coax cable. This is much more practical, but not quite as cool. Still function was the name of the game this time around.

Once the MP1DXMAX is set up on a band, you just work away, and dont need to think about it. In this way It reminds me of the convenience of using the CHA MPAS, without the need for a tuner. On the other hand the MPAS requires no fiddling and is faster to deploy. So each has its own strengths. I had no regrets taking the MP1DXMAX out for the RaDAR Challenge and it performed well. 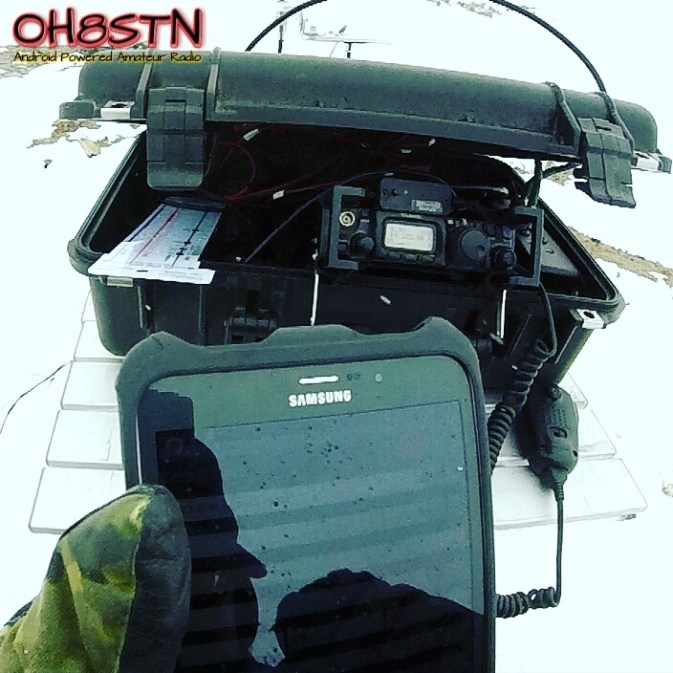 You may have  noticed my discussions about the Samsung Galaxy Tab Active SG-T365. This is a rugged tablet I used for the RaDAR Challenge. Let us start by reminding you of the conditions. Freezing rain, followed by freezing rain, ending with freezing rain! If you could here the filth coming out of my mouth about that blasted freezing rain. Still, this tablet is a trooper. It never stopped, it never complained, it never got jammed up from the ice, snow, and freezing bollocks, and it didn’t care about my wet gloves. I should write a commercial for this tablet.

I learned two things about digital man-portable field communications during the RaDAR Challenge.

Of course there are radios with USB built-in which just plug into a laptop. Again, that gets too big, too complicated, and in most cases, doesn’t support Android well. The thing about a wireless bluetooth audio inerface is my tablet is totally happy being wet, being cold, being dropped, … My radio gear is not. With a pocket-sized wireless bluetooth audio interface, assuming it is cold wx like I have here, my little qrp radio is happily comfortable inside the pelican case, while my tablet and I work digital modes. No cables required!

Anyway, the Samsung Galaxy Tab Active stood up and worked well during this outing. Is it going to replace my other phone or Nexus 9 tablets for everyday work? Absolutely not. Those devices are excellent for video editing. blogging, managing my YouTube channel, social media and all the other things I do with them each day. The Samsung Galaxy Tab Active is full on amateur radio!

I know most amateur radio operators can’t justify the price of such a tablet. If you live in a place with mild temperatures and only operate on Sunny warm days, then probably a cheaper solution will be perfect for you. For me this is what my operating conditions demanded.

Power distribution and batteries
As I mentioned earlier, I roughed together a go-kit/go-box style comms kit. The idea is brilliant, and I’ll certainly work to make it smller and more practical.

Here are the power portions of the kit.

Lessons learned for power and batteries. Rather than using AGM batteries, I beleive a single 20Ah lithium pack and lithium compatible solar charge controller would make a better power station. It would offer lighter weight, and the ability to shape the batteries into something other than a brick. This would help reduce the go-kit size.

Radio Power really needs to be explained. The RaDAR challenge is 4 hours long. my QRP Battery pack can power the FT-817ND running WSPR for about 5 hours @ 2.5w 50%. If I am running QRP power 5w or less (small rant: stop calling 10w qrp. 5w or less! ;)) I can run the FT-817 4-5 hours continuous. Now remember, I still have the eneloop batteries inside the 817 easily giving another few hours at qrp power levels.

Another trick I sometimes do is take my solar panel, connect a voltage regulator to output 12-13v, then connect it straight to the FT-817nd, putting the little 817 into charging mode. There are so many options, there should be no reason we can’t power this little rig. ( I would still prefer a LiFePO4 inside).

Shelter
There comes a time in everyone’s life when they need to admit some level of defeat. I need a teepee tent. Or perhaps  teepee tarp shelter. There is no getting around that! The WX is kicking my butt. The plastic tarp shelters don’t work here, as they become too brittle in the cold. I was offered a sponsorship deal for a teepee tent from USA, but they want the right to insure it’s a “positive review”. No thanks I guess.

The freezing rain really made it tough to focus on communications. Although my hands were the only thing cold, once they were cold, it was only a matter of time before the misery set in. This challenge taught me that a digital field station under a teepee is far more effective (for the operator) than just roughing it. I’m going to need to raise some funds for the November challenge.